It has been 10 months since Sam and Cupcake were released back into the jungle for the second time. They have been monitored every day by a trainer and technician. Sam has shown good activity levels and has protected baby Cupcake if she thinks anything potentially harmful is nearby.

Sam and Cupcake tended to travel by themselves in the forest, but sometimes Sam let other orangutans join them in the same tree to forage. Sam sometimes showed aggresive behaviour towards other adult female orangutans however she enjoyed to play with their babies, especially Vanilla.

Fruiting season finished in June 2018, thus encouraging Sam to travel further to find enough food. Her feeding activity reduced slightly over the last few months because forest fruits were scarce. However, she fed on more various items (more than 40 species) during this timer. Sangkuang and bayo fruits have been Sam’s favourite food lately and she even spent one month devouring all of the sangkuang fruits in one tree. Her moving actvity slightly increased as she travelled further to find feeding trees. It is very positive to observe that Sam has adapted very well during non-fruiting season. This is a critical time for orangutans that have been released to be able to prove they have the skills to source enough food during non-fruiting season and Sam has impressed everyone!

Sam and Cupcake spent most of their time 10m above the ground in the canopy and Sam is not coming to the ground at all. Sam is also building good quality nests in the afternoon and uses them for several days. She was seen stealing Suro’s nest once and Suro let her take it since she is scared of Sam.

Cupcake has become more active over the last few months. He is only clinging to Sam for sleeping, suckling or when Sam moves to another location. His feeding activity has also increased. Cupcake looks more independent and is learning well from his mum including how to climb, eating forest fruits and swinging from liana vines.  He has also had the opportunity to socialise with other young orangutans including Vanilla and Chilli. Cupcake has also displayed bravery by trying to protect his mum from adolescent males who want to mate with Sam. Cupcake has been seen biting, pulling and hitting the offending males. He has also thrown branches and sticks at technicians or the trainer if they approach Sam.

Sam and Cupcake both look to be in good physical condition however Sam has lost some weight during the non-fruiting season. Sam is still offered supplement food daily however sometimes she chooses not to come and take the food from the technicians and prefers to continue to forage for forest fruits which is excellent. Recently, Sam suffered from watery diarrhea for four days after heavy rains fell for one week. Medical intervention couldn’t attempted because she refused any contact with the trainer or technicians. Later, Sam was encountered eating cambium and leaves  more frequently over five days and her condition improved and stopped. It is very interesting to note that Sam changed her diet during this period of sickness and could have been self-medicating and again proving her growing independence and adaptation to the forest. 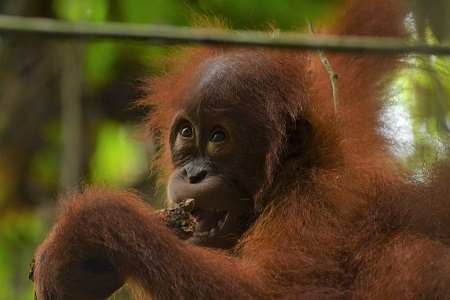 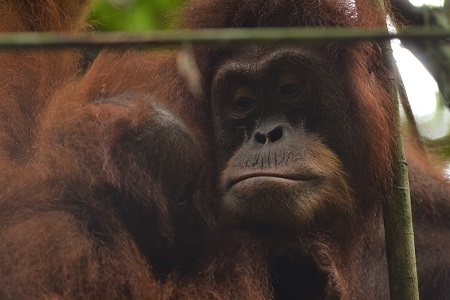 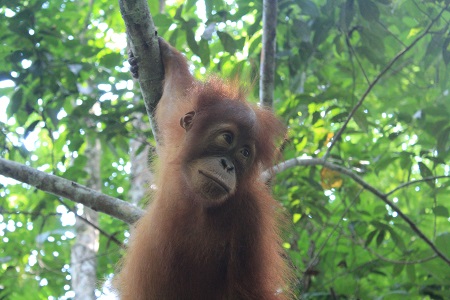 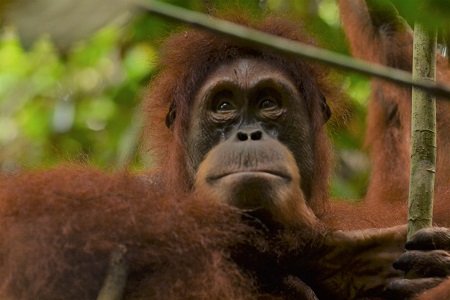 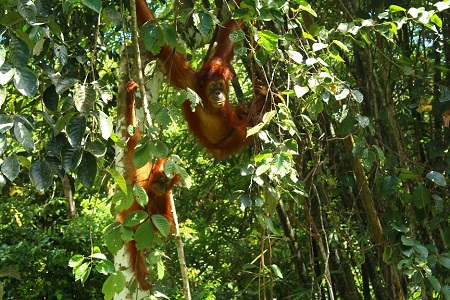 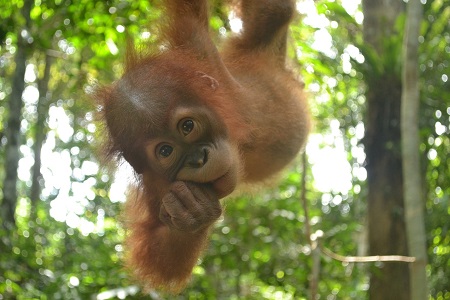