As participants of the 2015 Trans Borneo Challenge (TBC) prepare for their departure to Borneo on August 19th,

TOP is excited to announce that a documentary about the 2014 TBC adventure will premiere on the Nine Network. Airing on Channel 9 on Saturday 15th August at 3:00pm with an encore on GEM on August 19 at 3:30pm, the Ecochick Adventures: The Trans Borneo Challenge is hosted and produced by TOP Ambassador, conservationist and TV presenter, Lara Shannon.

With a shared passion and determination to help save one of our closest living relatives from extinction, Lara joined with 5 other women on the 25-day, 900km journey across Indonesia Borneo. The film captures the women as they navigate through dense jungles, climb the Müller Mountain Range and cross ford-flooded rivers as they battle the elements and an unforgiving landscape, and encourages viewers to support the work of TOP

The Ecochick Adventures: Trans Borneo Challenge provides an insight into the life and challenges experienced by both the human and animal inhabitants of Borneo, and shows that through a strong desire and commitment to making a difference - anything is possible. You can check out the film’s trailer here  Show your support and learn more about the Trans Borneo Challenge by tuning in to Channel 9 and GEM when the film airs. 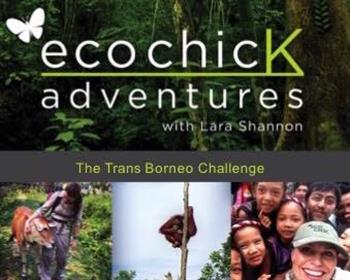