Lidya when she first joined out adoption programme.

It is with great joy I can inform you that in early March of this year, after her required 30 day quarantine period, Lidya was released back into the wild Camp Seluang Mas in the Seruyan forest area. Leading up to Lidya’s release, she began to resist going back to her sleeping enclosure and instead started making night nests in the canopy of the release forest. On days when she was not released, she would vigorously spit at any humans who came in the vicinity of her sleeping cage. This seemed to be her way of letting us know that she objected to being kept in her sleeping enclosure when she could have been out in the forest! Lidya is now a gorgeous adolescent with a lush coat of long orange hair that shines in the sun. She forages competently for wild foods, and moves skillfully through the trees. She seemed to have all the skills necessary for survival in the wild.

Lidya was released at the same time as her friend and cage mate Nanda as well as a wild, recently captured male juvenile named Frank. Lidya was alone in a separate transport cage while Nanda and Frank were together. Lidya was released first. When the cage door opened, Lidya left so fast that the photographs taken of her are blurred. Lidya headed directly for the feeding platform, stopped, turned back to look at everyone, had a drink from the bowl of milk sitting on the platform, and then climbed up slowly and deliberately into the top of the tallest tree behind the feeding station. One of the previously released males came over and climbed into the same tree with her.

When it started to get dark, the release team prepared to leave the forest to go back to camp. Lidya came down lower in the trees and looked confused for about half a minute as to why everyone was leaving without her. She expected the technicians to try and cajole her back into her sleeping cage! But once she saw that they were not interested in taking her back, she moved away and made a sleeping nest on the other side of the benches facing the platform.

It didn’t take long before Lidya was truly enjoying her freedom, and was nest making, exploring the nearby forest, attending daily feedings, and even mating with other recently released ex-captive males. Lidya is not yet pregnant but clearly enjoys the company of many of the other released exceptive orangutans, both male and female, around camp and in the forest. Lidya is happy and healthy in her new wild forest home. She has totally stopped spitting at humans.

If your adoption of Lidya was on auto-renewal we have transferred your adoption to Bunga from the Orangutan Emergency Centre, Ketapang, West Kalimantan. Bunga arrived at the centre in November 2009. She was about 2½ years old. Her story is similar to that of many other rescued orangutans: a family phoned the centre and asked the rescue team to go and pick her up from their house. See more information about Bunga. 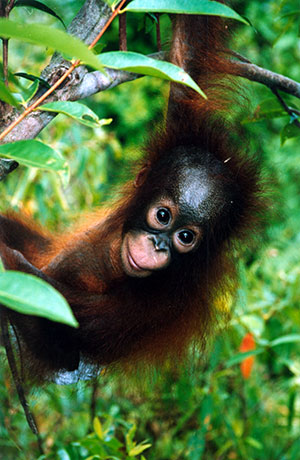