Bulan now lives within the socialisation complex situated at Nyaru Menteng 2 with one of her close companions named Nanga. Bulan lost weight after moving to Nyaru Menteng 2 and is now 21kg. Staff at Nyaru Menteng observed that it took some time for Bulan to settle into her new surroundings and also get used to new orangutans. Bulan is also a fussy eater.

Bulan’s favourite foods are banana, sweet potato and papaya. She is not fond of plain tasting food such as cucumber and eggplant. When situated within the Nyaru Menteng 1 socialisation complex, Bulan and Nanga lived with Carmen, Bela, Suma, and Nanda. Bulan and Nanga are not dominant orangutans so they were both at a disadvantage in terms of competition with other orangutans and obtaining enough food. This is why they were both moved to the socialisation complex at Nyaru Menteng 2. The technicians will keep a close eye on Bulan and make sure she puts weight on. 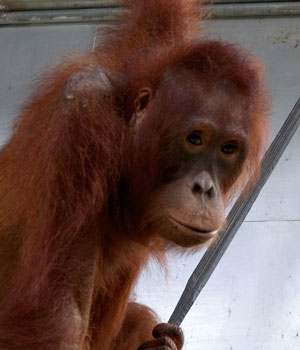