Earlier this week, our beloved orphan Miriam was evacuated from Sungai Pengian Station in Bukit Tigapuluh, Sumatra where she was recently released. Miriam had developed a severe illness after several days of not eating and was being transported to the project’s headquarters in Jambi for medical treatment. Miriam sadly passed away en route. A post mortem has shown signs of a chronic infection in her lungs. Tissue samples have now been sent to a laboratory to identify the source of infection.

Miriam was a much-loved part of our adoption program. She was cared for at the Batu Mbelin Quarantine Centre in Medan after her own mother passed away shortly after her birth. Miriam was known for her spirited streak and gorgeous long flowing hair. She was always very active and good at finding food in the forest. Miriam had a transmitter implanted between her shoulder blades in January 2013 so she could be monitored regularly by trackers after her release. Prior to her illness she was in very good physical condition.

Understandably, our team, project managers and supporters are filled with grief at losing these two [Pinky the infant also passed away this same week] very loved young orangutans. They have been the face for orangutan conservation as part of our adoption program.

Whilst their tragic loss is being mourned by all involved, it is important for us to remember during this time the progress that both of these very important release programs are making in restoring critical orangutan habitats. Over 150 orangutans have been released in Bukit Tigapuluh, an area where orangutans had become extinct, and 38 orangutans in Jantho, North Sumatra to date.

With less than 6,300 Sumatran orangutans remaining, every loss is felt acutely by me personally and our project managers on the ground. Importantly we know how invested our supporters are in their adopted orangutans, and we know you will feel the loss of Miriam and Pinky as much as we do.

Kylie our Project Manager remembers Miriam, “Miriam was just three months old when I first saw her as a wild-born infant in Bukit Tigapuluh in 2007. I was monitoring Temara, the released Perth Zoo orangutan at the time and she was very interested in Miriam. Temara was following Miriam and her mother in the forest. In expressing her interest, Temara hit little Miriam on the head and Miriam's mum chased Temara away! It was so sad when Miriam's mum died and she had to go to the quarantine centre in Medan. I've been waiting for Miriam to return to her true forest home for six years.It was so fantastic to see Miriam in the wild when I was at Bukit Tigapuluh in December 2012. She was so feisty and had to be bribed with food to return to the station after a forest school outing. She would also sometimes give her forest school carers a nip if she did not want to return home for the evening. She had such a promising future and I am so saddened by the loss of this truly special little orangutan. RIP Miriam.” 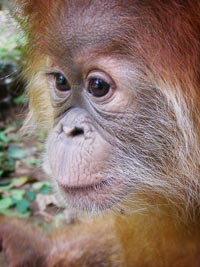