Miriam made excellent progress in her forest school training since the last update. Miriam was always very keen to go on her forest outings at Dano Alo with her favourite companion Mambo.

She was always very active and good at finding food in the forest. Due to these traits, Miriam was chosen along with numerous other young orangutans to be moved to Sungai Pengian for release. Miriam had a transmitter implanted between her shoulder blades in January 2013 so she could be monitored regularly by trackers after her release.

Miriam was released on 28 February 2013 at Sungai Pengian together with orangutans Mambo and Ayu. Miriam is a very social orangutan and after her release was regularly seen with other orangutans including Ayu, Mambo, Rimbani, Violet, Ken and Peni. Miriam was actively looking for food along various trails at the release site.

Miriam is well known for her spirited streak. When her trackers are close by, Miriam will sometimes descend the tree and chase the trackers, trying to bite them. Miriam has been observed feeding on fruits from numerous tree species including Mahang, Medang, Malabai, Rotan, Keranji and Kasai tress. She also eats a wide range of leaves. It is very positive that Miriam actively searches for a variety of foods. She is in very good physical condition and her hair is thick and shiny. Miriam is checked regularly by trackers who monitor her progress. 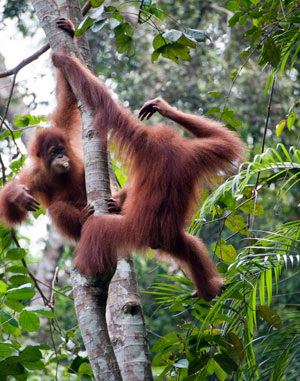