. Enrichment was given twice daily, different each time. Leaves were given twice a day, at noon for playing and late afternoon for nesting. She regularly goes to jungle school twice a week for minimal. Now she is at Open Orangutan Sanctuary (OOS) in small socialisation cage. Very healthy and had no illness since she came to OOS. The only medical case was when she had mild injury on her finger since got bitten by Win Gayo (the adult male orangutan).

Her cage-mate was changed almost every week to improve her socialisation skill. She has no problem to make a friend with other orangutans but not very close with Ayu and sometimes stays away from her. Friends best with Mambo and Ken – the new comer from Medan. Loves to play rough and take them on in wrestling matches. She does certainly very confident and doesn't afraid against bigger orangutans. She craves for human's attentions. She will stop playing with other orangutans and always come over and put her hands trough the cage asking for play when human around. She doesn't allow others to get the attention and will hog the spotlight with various ways like put her hands through the cage, make an ugly face, or hold the staff. She quietly impatient and get easily frustrated when trying to finish some difficult enrichment like fishing, using the ‘Kong' toy, the ‘green ball', or basket fruit.

While she gets boring, she will taunt and intrude other orangutans, then gets fight with them. She has also quietly unfocussed to finish her foods, particularly when staff nears her. While she was eating, she will give some of the foods to the staff, swinging around the cage, and come to the staff to get the foods back. When nesting time, she loves to play with the leaves and drop off most of it rather than arrange the nest. She is a very confident climber, but sometimes over confident, throwing herself about swinging erratically from the trees and vines. When she was going to jungle school with other orangutan, especially with smart one, she had courage to climb very high (more than 15 m). but when she was alone, she prefer not to far away from the staff.

She loves to experiment with various leaves and fruits and has even been seen eating the fibrous bark of the liana vines and rattan stem. She was also interest and curious with termites and ants nest. She has good abilities for release but need to improve her nest making skill and more carefully while swinging. 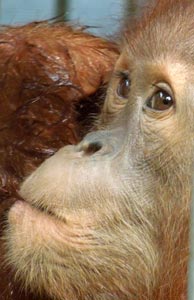 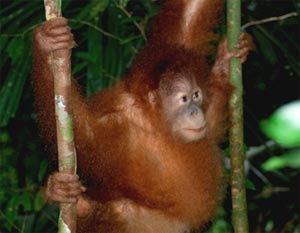