Sidney is everything a juvenile should be – spirited, inquisitive, strong-willed, and playful.

When he goes out to the forest with his caregiver each day, Sidney begins the trip riding on his/ her back. However, his independence quickly comes to life and Sidney will climb off his caregiver's back so that he can lead the other orangutans down the boardwalk.

Occasionally, a patch of forest will beckon to him and Sidney will veer off to explore while his caregiver patiently waits. Sidney, a very playful orangutan, has been known to play tag and “dress” up. Somedays when Sidney and his caregiver are going into the forest, he will tap her on the leg (as if to start a game of tag) and then she will run off with him in close pursuit. Recently, Sidney returned from one of his explorations with a burlap sack he had found. Sidney had draped the sack around his shoulders to make a cape and then came running toward the other orangutans as if he was Superman. Sidney has gained weight over the past half year and now weighs 19.5 kg (42.9 pounds). 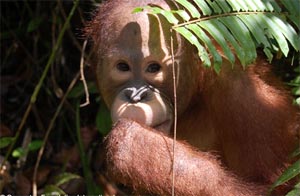