Organisation you work for: 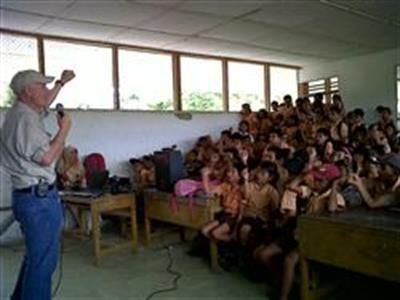 How did you get into the work you do presently?

My passion for orangutans began when I taught symbolic communication to a juvenile orangutan at the Fresno City Zoo (1973-1975) as part of my master's project. I later taught sign language to free-ranging, ex-captive orangutans at Camp Leakey in Tanjung Puting National Park (then a nature reserve, 1978-1980, 1981). I co-founded and became the vice president of the Orangutan Foundation with Birute Galdikas in 1985 to study, conserve and educate the public about orangutans (1985-2004). I co-founded and became project manager of the Orang Utan Republik Education Initiative (OUREI) with my Indonesian wife (2004) to focus on the causal issues behind the decimation of the species (including lack of education, ignorance, apathy and fear by Indonesians) and to focus on the population that was critically endangered - the Sumatran orangutan (Pongo abelii). In 2007, the Orang Utan Republik Foundation (OURF) obtained its tax-exempt status as a non-profit in the USA and I became its President.

Describe the main aspects of your work:

From Monday-Thursday (7:30-18:00), I am a hazardous substances scientist for the Department of Toxic Substances Control, under the Californian Environmental Protection Agency. I am a member of the emergency response program and serve as duty officer on a rotational basis. That is how I pay my bills.

From Monday-Thursday (18:00-22:00) and Friday-Sunday, I administer, plan, manage and conduct activities that support the mission of OURF including content development of the website, newsletter, proposal writing, fundraising, volunteer management, outreach planning, membership database, communicating with stakeholders in Indonesia and overseas.

Two to three times a year, I use my leave time from my paying job to travel to Indonesia to conduct events, oversee operations with our partners (OUREI Indonesia), undertake field visits in Sumatra, attend conferences, give lectures and lead eco-tours.

I enjoy being able to inspire young people in Indonesia and around the world to become involved in securing the future of the orangutan and its rainforest habitat. I also enjoy collaborating with other people and organisations to make a significant difference in the future of our planet and in the lives of disadvantaged people.