It is with great joy I can inform you that Sidney has now been released. The picture to the right is of Sidney when he first joined out adoption programme.

He is now an older juvenile, sweet, calm and relaxed. However, as he has grown in size over the months he has become increasingly volatile when his caregivers (predominantly women) try to put him back into his sleeping enclosure after a day out in the Care Center forest. He simply does not want to leave the forest! He wants to stay there. He makes nests, he forages for wild foods and travels well in the canopy. This made him a leading candidate to be released into the wild.

Sidney and his sleeping cage buddies have now been moved to one of the remote release camps.

If you are on auto-renewal for your adoption of Sidney e have transferred your adoption to Chocolate from the Batu Mbelin Quarantine Centre. Chocolate was confiscated from villagers in Southwest Aceh. He was very thin, with dry skin and dull, wiry hair. By chance, his confiscation coincided with the presence of a film crew from NBC in the USA, and Paul Hilton, a well-known photographer based in Hong Kong, so the whole process was well documented. See more information on Chocolate here. 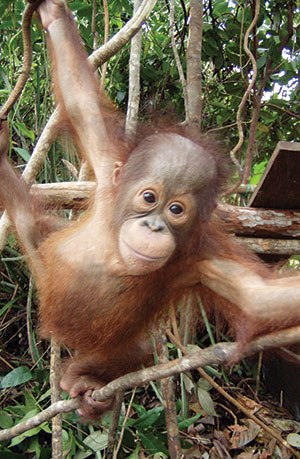