Dora was confiscated from a Buddhist monastery in Tebing Tinggi, a small town two hours from Medan, Sumatra. She is originally from Kuala Simpang, Aceh. She was sold to the monastery when she was about 1.5 years old. Dora was voluntarily handed into SOCP in August 2011 when she was three years old. She was taken to the Batu Mbelin Orangutan Quarantine Centre and weighed approximately 8kg. She was quite tame and familiar with humans.

Dora settled in well at the quarantine centre. She had a good appetite and was interested in the other orangutans. She learnt to use leaves to make a nest and would take afternoon naps in her hammock. When she moved to the socialization cage she interacted and played with the other orangutans. Dora was a gentle orangutan and also liked the company of the technicians since she was used to human company. Dora put on weight and her hair became darker during her time at Batu Mbelin. She was an energetic orangutan, playing on the climbing apparatus, other orangutans and she also liked to play with water. After spending almost two years at Batu Mbelin, she was transferred to the orangutan reintroduction centre in Bukit Tigapuluh, Jambi in April 2013.

Dora is now five years old. She is currently residing at the Dano Alo Sanctuary at Bukit Tigapuluh where she is being trained for release back into the wild. Dora is housed in socialisation cages at BTP. The orangutans are given many feeds and enrichment to undertake during the day to keep them mentally and physically active. Enrichment items include various feeding puzzles, leaf parcels, fishing activities and a range of forest food including fruits, leaves and termites.

Dora undergoes regular forest school training in the Bukit Tigapuluh forest. Dora is going very well at forest school. Her wild diet during forest school includes over 70% fruit which is excellent. Fruit contains lots of energy so it is imperative that wild orangutans gorge on fruit when they can during the fruiting season to put on body condition. Dora is also eating other forest food including leaves and insects which are a good source of protein. She will also receive some supplement food from the technicians while she is learning.

Dora is a very active and energetic orangutan and this is obvious in her forest school outings. She spends over 80% of her time feeding and travelling and only has short rest periods. Dora is also friendly and playful with the other orangutans.

Dora must learn to make sleeping nests when she is at forest school. It is hoped that she will learn this important skill from other orangutans in her forest school outings and also when the orangutans are given large leaves and stems in the cage to make nests. Orangutans will only be released when they can prove they are able to make good, stable nests in the canopy and not come down to the ground. Orangutans must sleep in arboreal nests to avoid parasites and predators on the ground. 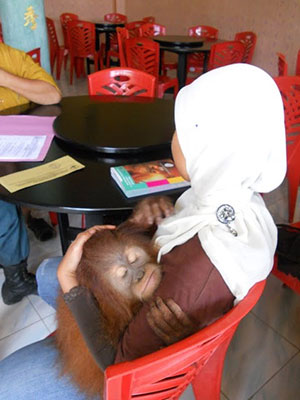 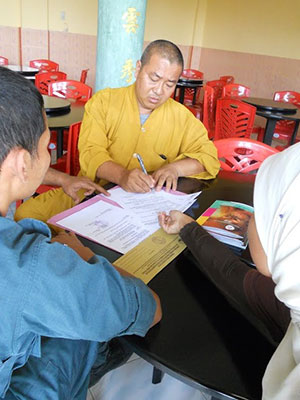